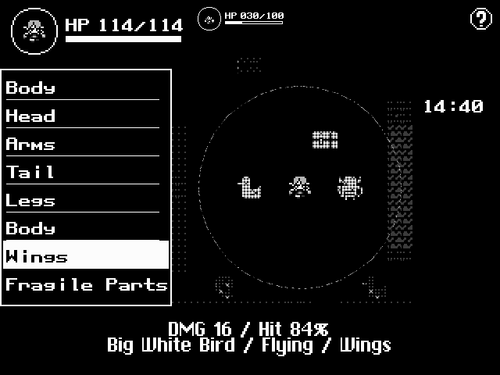 Too Many Games 2019 in Oaks, PA this year was a blast and Luna Red was feature again, showcasing retro inspired A:\dventure to the public with a lot more content and styling than last time.  The plan for the convention was to get a bunch of playtesters to try it out, break it a bunch, and get people interested in seeing more.  Steps 1 and 2 were for sure executed on, and I think there are people interested now in seeing more.  As promised, within a few short days of the end of TMG2019, A:\dventure has released its first public build online for people to play, test out, and give feedback at any time!

Some of the changes made over the course of the con and shortly after include
- bugfixes to dungeoning, so now maps generate correctly and things should always spawn within walls
- guaranteed uniqueness of dungeons based on loading files
- some menus key input has been fixed so a mouse is required in less places
- Help text in combat accessible with the F1 key now has updated text detailing current mechanics
- Key bindings have been changed to for more intuitive controls (ie. swapping characters is done with Tab instead of C)
- Number pad bindings added, making for easy one handed play
- Enemies now block your path
- Accuracy reworked, now matching Vagrant Story's combat formulas (Stamina works like RISK)
- Vigor/Stamina no longer recovers immediately, instead having a 1 second cooldown to prevent spamming
- Some quests now have tutorial dialog when you enter the dungeon

Be sure to report any bugs and suggestions in the community forums!  Thanks for checking out A:\dventure